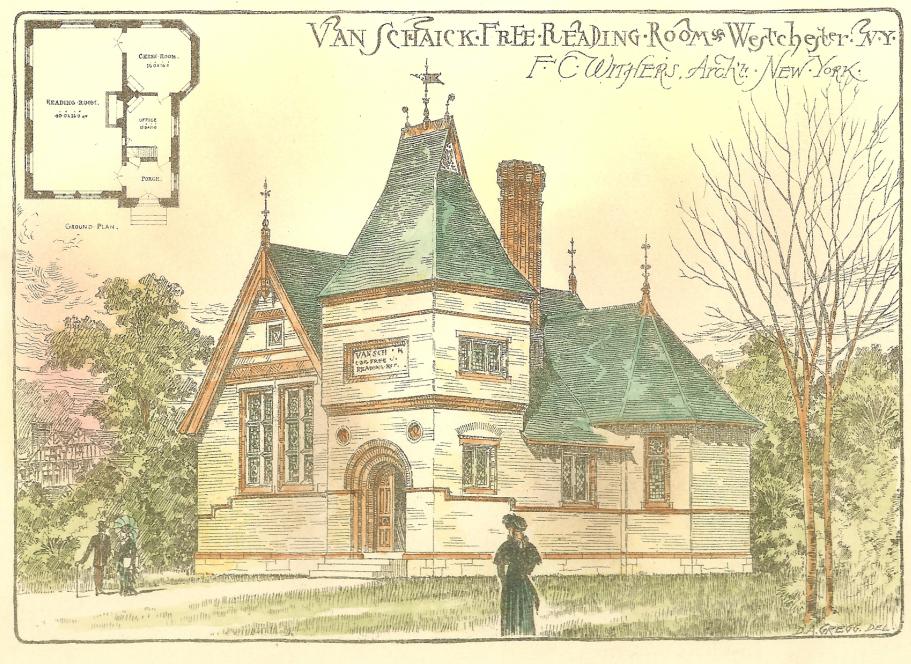 The Huntington Free Library and Reading Room is one of the oldest public libraries in The Bronx. In fact, when the library opened in 1891, the area at the time was still part of Westchester County. In 1895, the area was annexed to New York County, then finally Bronx County in 1914. The story begins with a local philanthropist named Peter C. Van Schaick who lived in a quiet water front community called Throggs Neck. Van Schaick bequeath funds from his estate to build a free library and reading room to be donated to the citizens of the Village of Westchester. Frederick C. Withers, designer of Greenwich Village’s Jefferson Market Courthouse, was engaged as architect and the result was a Victorian masterpiece. The library, constructed between 1882 and 1883, contained three main rooms, the main reading room, a chess room and an office. There was also a small room located within the “turret”. Sadly, this beautiful building was ultimately refused by residents of the of Westchester because they did not want to pay for its upkeep.

The building in Westchester sat vacant until 1890 when another local benefactor and Van Schaick neighbor Collis P. Huntington was somehow informed of the situation and decided to take over the project. Huntington, a Southern Pacific Railroad magnate, had a summer home nearby known as “The Homestead” that was located near the library. His estate is still there and is now home to Preston High School.

Huntington hired local architects William and James Henderson to work on the redesign of the building. The Hendersons added a two-story rear addition, as well as a billiards room on the lower level of the building. Collis P. Huntington made the opening address on October 17, 1891, and the Catholic Protectory Band supplied the music.

In 1895, the Town of Westchester was absorbed into what would ultimately be called Greater New York. The HFL was the only library in the Westchester Square area of the Bronx for many years to come. It wasn’t until 1937 that the New York Public Library opened a branch across the street in what is now the Owen F. Dolan parkhouse.

In 1930 the library took on a new venture when Huntington’s son, Archer, who was himself a noted philanthropist and benefactor of the Museum of the American Indian, built an annex storage facility to house the extensive native collections. For many years the library aligned its name with the museum, but it was not until the 1990s that the Smithsonian created the National Museum of the American Indian and sued the library – creating a 15-year litigation process through state and federal courts. Although the library ultimately won its right to the native collections, the mounting legal fees forced the institution to sell the collection to Cornell University. Today the collections are all digitized and accessible to the public.

The Huntington Free Library and Reading Room continues to be a thriving resource for The Bronx community. Over the years, it had amassed a book and artifact collection on Bronx and New York history and the space has been popularized in recent years when an episode of HBO’s Boardwalk Empire was filmed inside. Although the space transports you to the late 19th century, it continues to serve The Bronx, especially during a time of need. When Covid-19 struck in 2020, staff and friends used the library as a food pantry that ultimately feed over 50,000 families in a span of 5 months. A digitization project had commenced in October 2021, in an effort to not only preserve our borough’s history, but to make accessible for future generations to come.